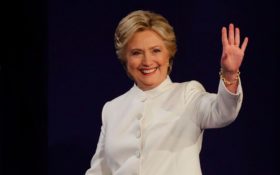 It’s not a story you’ll hear from the mainstream media, but the information is straight from their own polls.

And it destroys the liberal narrative.

Republican presidential candidate Donald Trump is going to be elected… thanks to African American voters.

Sorry liberals, but it’s your own polls that prove it: Democratic presidential candidate Hillary Clinton cannot win without rigging the election.

Recent data released by The Washington Post, Rasmussen, and CNN all show Trump winning over minority voters at a surprising pace.

In fact, he’s on pace to win the GOP its largest share of black votes in over 50 years.

It could be because liberals assume that black voters will do what they’re told – and because this information runs so counter to the mainstream media’s narrative, the pollsters haven’t even bothered looking for this shocking shift.

It could simply be that these pollsters are crooked and don’t want the information out there.

No matter the reason it’s being ignored, here’s the fact: It exists.

It’s right there, clear as day, if anyone bothers to look. And it’s going to shake-up the entire 2016 election.

Compared to previous Republican candidates, Trump has a HUGE share of minority support… and it’s growing.

Should this trend continue, it won’t just be a victory for the Republicans.

It will be a Trump landslide.

The Washington Post reported on the trend on October 16th, but ignored the mathematical significance. “Clinton has a solid lead with black and Hispanic voters. She holds a 79-point lead among African American voters in combined September and October polls. That is similar to earlier polling, but smaller than Obama’s 86-point margin among this group in 2012. Clinton holds a 28-point lead among Hispanic voters in combined polls – a group Obama won by 44 points in 2012,” The Post said.

So Trump is losing minorities. That’s no surprise.

But the hidden story is: By how much?

Trump doesn’t have to win these voting groups. He only has to do better than former GOP candidate Mitt Romney performed in 2012, while maintaining Republican support elsewhere.

And Trump is doing a FAR better job compared Romney connecting with minorities. According to pollster, the numbers have continued to increase favorably for Trump in the past month.

What does that mean for this election?

Should Trump maintain Romney’s share of the 2012 vote elsewhere, but he successfully increases the GOP’s share to approximately 20 percent of black and 35 percent of Hispanic votes in battleground states — exactly what polling trends suggest he’s doing — a quick number crunch shows the electoral map on Nov 8 looks like this — That’s a lot of red, and it means President Donald Trump will be inaugurated on Jan 20

…unless, of course, the Democrats manage to rig the election.