Incredible! Dog, lost at sea, returns over a month later - The Horn News 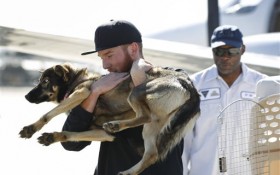 It sounds like a pitch for a far-fetched movie: “Cast Away,” but with a dog instead of Tom Hanks. Only this sea tale is true.

A California fisherman’s beloved German shepherd fell overboard and was presumed drowned. More than a month later, she was found.

The 1 ½-year-old dog named Luna was spotted this week on San Clemente Island, a Navy-owned training base 70 miles off San Diego.

The blue-eyed pup disappeared Feb. 10 as Nick Haworth, a commercial fisherman from San Diego, worked on a boat 2 miles from the island.

“They were pulling in their traps, and one minute Luna was there, and the next minute she was gone,” said Sandy DeMunnik, spokeswoman for Naval Base Coronado. “They looked everywhere for her. They couldn’t see her. The water was dark, and she’s dark.”

“He insisted that he was 90 percent sure that she made it to shore because she was such a strong swimmer,” DeMunnik said.

She was presumed lost at sea. Until Tuesday, that is, when staff arriving for work at the island’s Naval Auxiliary Landing Field spotted something unusual — a dog sitting by the side of the road. Domestic animals aren’t allowed on the island for environmental reasons.

“She was just sitting there wagging her tail,” DeMunnik said. The staff called to Luna, and she came right over.

A biologist then examined the dog and found her a little thin but otherwise healthy.

“It looks like she was surviving on rodents and dead fish that had washed up,” DeMunnik said.

Officials called Haworth, who was out of state, working in the middle of a lake.

“He was overwhelmed. He was so happy and grateful and thrilled,” DeMunnik said.

Luna was flown to a Navy base on the mainland Wednesday and handed over to Haworth’s best friend, who will care for the dog until Haworth returns Thursday night.

Luna, meanwhile, has a souvenir of the experience. Her dog tag was lost but the Navy gave her a new one, DeMunnik said.

Along with her name, it bears a key lesson in the Survival, Evasion, Resistance and Escape course taught on the island to Navy and Marine personnel. The tag reads: “Keep the Faith.”