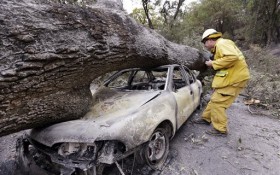 These seniors had what it took to pull off a narrow escape in the face of an out-of-control wildfire. Ranch managers Don and Martha Grimm barely escaped with only the clothes they were wearing as a destructive, fast-moving fire roared toward their Northern California home. Now they have to rebuild.

The couple, both in their 70’s, held hands as they returned to their neighborhood to find only rubble where their home once stood. Martha Grimm broke down in tears.

“We didn’t have a chance to react. It was here and we got out with the clothes on our back. All of our memories, everything is gone,” Martha Grimm said.

Like the Grimms, some residents cried as they walked through the rubble of their homes while others shared amazing stories of survival when more people returned to their houses Tuesday and surveyed the twisted metal and smoking ruins left behind by a devastating California wildfire.

Don Grimm said he was surprised to find the ranches’ chickens, horses and llamas survived the fire. But ten sheep in a barn didn’t make it.

Rancher Lisa Comstock said she and her three dogs survived the raging fire in rural Middletown by jumping into a water trough as flames neared her home.

Comstock was also able to keep her horses nearby as the fire burned around them.

“The flames were coming over that mountain and surrounding this place like there was no tomorrow,” she said. “I jumped in the water trough with all the dogs, and the horses came up around. Thank God they just stayed here.”

At one point she was sure she wasn’t going to make it but talking to her animals helped her and the animals keep calm.

“If this is how I go, I’m not leaving these animals. That’s all I could think of,” she said.

One person has been confirmed dead, and others were unaccounted for, but authorities said they could be staying with relatives, on vacation or elsewhere and not impacted by the fire.

The dead woman has been identified as Barbara McWilliams, 72. She told her caretaker she didn’t want to leave her home near Middletown. The world traveler and sharp-minded woman with advanced multiple sclerosis said she would be fine.

Her body was found Sunday in her burned-out home after flames kept Lake County sheriff’s officials from reaching her.