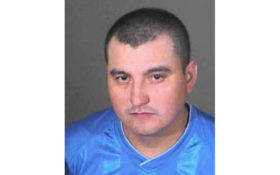 It’s a horrifying story too disgusting to believe. But it’s true, and it’s not over yet.

A search is underway for an illegal immigrant from El Salvador who is suspected of sexually assaulting a 5-year-old girl in Southern California in December.

The Fullerton Police Department posted to their Facebook page Wednesday, alerting residents to be on the lookout for Rigoberto Arevalo Cubias, who they have just named as the suspect of engaging in sexual intercourse or sodomy with a young girl. He is described as male, Hispanic, approximately 5’7”, 185 pounds, with black hair and brown eyes.

This disgusting, unimaginable act is further proof of the necessity of stricter border control. Prior to the alleged rape, Cubias was arrested for a DUI is 2014, for which there is an outstanding $50,000 warrant for his arrest under the alias, “Jose Cubias.”

And that’s not his only alias he’s using to fool American police.

Cubias has been reported of using at least five different aliases, including Jose Cubias Arevalo, Jose Riberto Cubias, and Jose Alfonso Cubias Arevalo. Police reported he may be in possession of a fake California driver’s license and had ditched his previously owned care and cell phone is his attempts to escape authorities.

This life-altering event for an innocent preschool girl forced by a criminal who should never have been allowed in her country.

Anyone with information on the suspect is encouraged to call Fullerton police Detective Carin Wright at 714-738-6754.

What’s even worse, this is not the first time this year a criminal immigrant has raped a child in the U.S.

The Horn News reported earlier this year about an illegal immigrant charged with brutally raping a middle school girl on a Greyhound bus.

He had been deported a shocking 19 times before the crime, but always managed to make his way back across President Barack Obama’s weak border security.

In March, the U.S. Immigration and Customs Enforcement revealed data on illegals released from jail during Obama’s administration.

What it proved was shocking.

The illegal immigrants that had been released from police custody had committed at least 135 murders between 2010 and 2015.

A criminal of any magnitude who is in America illegally should not be permitted in our great nation to take advantage of the citizens that live here legally.

The ease of reentry and evasion of arrest by both of these criminals is proof that the current system is failing and a wall is necessary to protect our borders.

While Obama clearly disagrees, he only has one week left in office to let the illegal immigrant crime spree rage on.