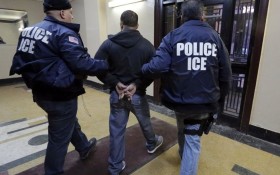 In response to inquires by Congressional leaders, the U.S. Immigration and Customs Enforcement (ICE) has revealed data on the illegal immigrants ordered released from jail by the Obama administration since 2010… and the information has critics of the White House outraged.

In a memo to Judiciary Committee Chairman Sen. Chuck Grassley, ICE revealed a crime spree following the release of thousands of illegal aliens and that 124 of these illegal immigrants — released from police custody according to White House policy — committed at least 135 murders between the years 2010 and 2015.

The memo states that these criminal illegals were associated with 250 different communities in the United States, “with the most clustered in California, New York and Texas.”

According to the Center for Immigration Studies (CIS), three more have been charged with murder since, bringing the total would-be killers released since 2010 to 124.

These killers are far from the only illegal criminals ordered released during that time period thanks to the Obama administration’s policies.

According to the CIS report, just 2015 alone “ICE released a total of 30,558 criminal aliens from its custody. These aliens had already been convicted of 92,347 crimes before they were released by ICE,” and since their release they were convicted of committing 2,560 new crimes.

Even more alarming, these totals don’t include those illegal aliens released due to sanctuary city policies — meaning the crime numbers are undoubtedly higher.

Immigration has become an increasingly large issue on the 2016 presidential campaign, and GOP frontrunner Donald Trump is best known for promising to build a wall to stop the illegal migration into the U.S. from Mexico.