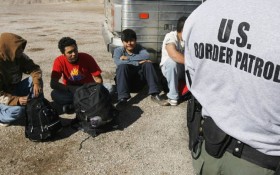 Are illegal immigrants trying to make their way into America while they still can?

New data shows that illegals may be rushing to take advantage of President Obama’s lax border polices before America elects a new president in little over a year.

The last month was the worst August in five years for illegal border crossings, according to newly released government documents. Border agents have reported a jump in arrests since July.

According to the Associated Press, the Obama administration is claiming it’s not sure what’s behind the spike. But talk of America building a border wall, initiated by presidential candidates like Donald Trump, could be a motivating factor.

The U.S. Border Patrol arrested nearly 10,000 unaccompanied immigrant children and families caught illegally crossing the border with Mexico in August, a 52 percent jump from August 2014, according to statistics published by the agency Monday afternoon.

Since the start of the fiscal year in October, border agents have arrested more than 35,000 children traveling alone and more than 34,500 people traveling as families, mostly mothers and children.

The Border Patrol reported arresting 6,424 unaccompanied immigrant children and families in August 2014, compared to 9,790 this year.

The August increase comes a year after a surge of more than 68,000 unaccompanied children at the U.S.-Mexico border.

White House spokesman Josh Earnest admitted the August numbers were a “surprising uptick”, but failed to provide a reason for the increase.

Adam Isacson, a border expert and senior analyst at the Washington Office on Latin America, said the 4,632 unaccompanied children caught at the border last month is the highest number his agency has recorded for the month of August since their records began in 2009.

Isacson said historically, crossings start to slow after springtime highs. But July 2015 saw an uptick, and now the number of unaccompanied children crossing in August has begun to rival numbers from the beginning and the end of last year’s huge surge.

Isacson said that this could indicate the beginning of another surge, noting that the number of people caught traveling as families also ticked upward last month.