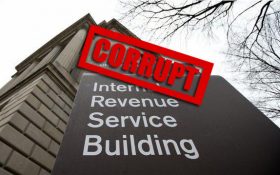 The shocking corruption at the most hated government institute in existence has been exposed — and the truth is ugly.

Hundreds of IRS agents in charge of making sure we all pay our taxes were busted for gaming the system so they could get out of paying their own taxes.

They were all fired immediately to make an example of their sorry rear ends, right?

New internal documents exposed by the Tax Revolution Institute reveal the ugly truth: Last year, some 500 IRS workers were disciplined for problems with their own taxes.

Some of them “understated” their taxes, aka cheated. Some filed late. Some never bothered to file at all.

But the one thing nearly all of them had in common? They’re still employed.

Only five of these people were fired despite the fact that the Taxpayers’ Bill of Rights legally requires IRS workers to get canned if they’re ever busted dodging their own taxes.

They only way they can avoid this penalty is with a waiver from the IRS commissioner – and apparently, he’s been handing them out like candy corn on Halloween.

“Government employees take an oath to the follow the laws they are enforcing,” Tax Revolution Institute Legal Director Robert Rodrigo said. “Clearly, the government officials who have decided to allow these tax evaders to continue to be employed by the IRS are enforcing the law more leniently for them than they do for you or I.”

This isn’t the first or only time IRS workers have gotten away with the kind of activity that would lead to massive penalties – and almost certainly painful and extensive audits – for the rest of us.

In fact, a few years back workers who didn’t do their own taxes right were actually rewarded with BONUSES. A damning 2014 report found that the IRS paid out $2.8 million in bonuses to workers with discipline issues – and more than $1 million of those bonuses went to workers didn’t pay their own taxes.

These weren’t people who had a problem a long time ago and cleaned up their act after getting a second chance.

The report, published in USA Today, found 1,146 workers were given bonuses in the form of cash, paid time off and even raises within a year of their own tax problems.

And just as in the new report, many get off with a small slap on the wrist.

Only 25 percent were fired, while 14 percent were allowed to retire – no doubt with full benefits – or resign.

The rest — 61 percent — were allowed to continue to work, enforcing the rules and regulations on others that they didn’t apply to themselves.

“It is crucial that IRS employees are held to the same standards as the hardworking taxpayers that pay their salaries,” Utah Sen. Orrin Hatch, chairman of the Senate Finance Committee, said at the time, according to The Associated Press. “That means filing their taxes and paying the taxes they owe to the government.”

Yet as the latest report shows, they’re still not being held to those same standards… and that, in a nutshell, may be why Americans are ready to replace everyone in Washington.