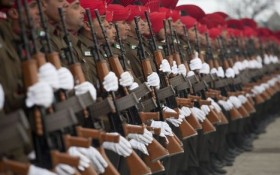 Saudi Arabia announced to the world Tuesday that 34 nations have agreed to form a new “Islamic military alliance,” combining some of the largest Muslim military forces around the world under a joint operations center based in the kingdom’s capital, Riyadh.

The alliance is reportedly designed to help fight extremism and terrorism in the region, but its list of members is raising serious concerns among security experts.

Some of the countries involved have known links to terror groups. And a military buildup among these nations could end up benefiting terror organizations.

Included in the massive alliance, for example, is Sudan, which has been listed by the U.S. State Department as a state sponsor of terrorism for the past 22 years. The country is known to support and even finance the terror group Hamas.

Libya, Pakistan, Yemen and Palestine – all suspected in the past to have direct ties to terror groups – have also pledged their forces to a combined military unit they say will cooperate against extremism in the Middle East.

The announcement, published by the state-run Saudi Press Agency, said the alliance will be Saudi-led and is being established because terrorism “should be fought by all means and collaboration should be made to eliminate it.”

But when it comes to the war on terror, there have long been concerns that the Saudis are essentially playing both sides.

As The Horn previously reported, a member of the Saudi royal family was detained in Lebanon in October after two tons of a drug popular among ISIS fighters was being loaded onto his private jet.

As the news of the new coalition emerged, it was not immediately clear what kind of organizational structure it would have and what its rules of engagement would involve.

The new alliance includes nations with large and established armies such as Turkey and Egypt, as well as war-torn countries in the region. It extends across both the Middle East and Africa, which countries such as Mali, Chad, and Nigeria are also pledging their militaries’ support.

Other Gulf Arab countries such as Kuwait, Qatar and the United Arab Emirates are also in the coalition, though notably absent from the list is Oman, a neighbor of Saudi Arabia.

A Lebanese official confirmed to The Associated Press that his nation was also part of the 34-nation coalition. Lebanon is the home base for the terror and paramilitary group Hezbollah.