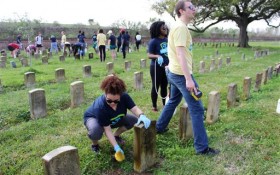 College students on spring break joined hundreds of other volunteers at a cemetery dating to the Civil War, realigning hundreds of tilted headstones and scrubbing grime from thousands more. Some mark the graves of Union soldiers, others are from later eras.

College students from Ohio and Boy Scouts from Texas were among more than 800 people who pitched in to restore graves at Chalmette National Cemetery near New Orleans. Many of the roughly 8,000 headstones were green with algae, stained with soot from nearby refineries or askew in spongy Mississippi River soil. Flooding from Hurricane Katrina in 2005 also took its toll.

“We’re sitting on a delta,” said Ranger Kristy Wallisch, spokeswoman for Jean Lafitte National Historical Park and Preserve, which includes the cemetery. “Just like our houses and other things, these headstones start to sink under their own weight, and tilt.”

More than a century and half since the end of the deadliest conflict on American soil, custodians of many such cemeteries are still doing battle in their upkeep.

This cemetery was created in 1864, when Union troops occupied New Orleans. Most of the Civil War-era soldiers died of such diseases as yellow fever, dysentery and pneumonia, said park curator Kathy Lang.

“Some enlisted, say, in December and died in May from disease. That’s kind of sad,” she said. But New Orleans isn’t unique: about two-thirds of the roughly 620,000 Civil War casualties died of disease, not wounds.

The National Park Service maintains 14 national cemeteries, the Department of Veterans Affairs 134 and the Army two, including Arlington National Cemetery outside Washington, D.C.

Nationwide budget cuts have not spared this cemetery. The budget for Jean Lafitte, which encompasses six sites around Louisiana, has been slashed from $16.7 million in fiscal 2008 to $5.8 million for fiscal 2016, Superintendent Lance Hatten said.

Wallisch said the Chalmette cemetery site — including an adjacent tract where the Battle of New Orleans was fought in 1815 — has just three or four maintenance workers compared to six or seven in the early 2000s.

That’s where the army of volunteers came in, including about 50 Ohio State University students seeking a different kind of spring break. The National Trust for Historical Preservation called volunteers ages 16 to 70 to take part in its 3-year-old “HOPE Crew,” or Hands-On Preservation Experience. 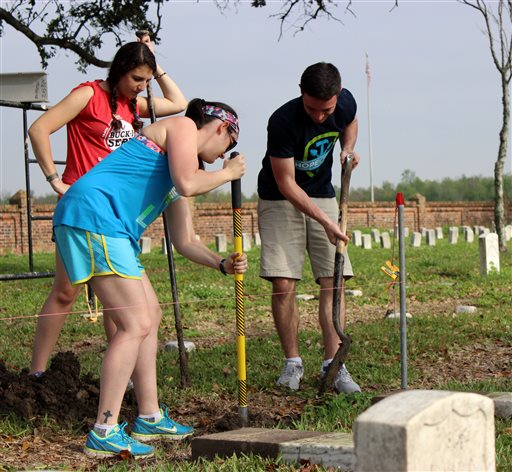 ADDS NAMES OF STUDENTS – In a Wednesday, March 16, 2016 photo, Ohio State University students Sivan Zouela, back left, Jill Auxter and Ryan Seybold work to straighten a gravestone at Chalmette Natinoal Cemeterywork in Chalmette, La. They were among about 50 Ohio State students working at the cemetery on Wednesday, March 16, 2016, as part of a nearly month-long project organized by the National Trust for Historic Preservation. (AP Photo/Janet McConnaughey)

The Chalmette project began in early March and concludes Friday.

“We get people to work with their hands, have a very real and visceral experience and closer connection to restoration,” said project coordinator Monica Rhodes.

A volunteer crew of professionals pulled headstones from the most misaligned sections of the cemetery early on. The non-pro volunteers took it from there, taking up shovels, buckets and sponges under the guidance of restoration experts.

When the OSU students were there, Rusty Brenner of Texas Cemetery Restoration LLC in Dallas explained how to calculate the depth of the holes they needed and how much gravel to add before setting the headstones precisely upright.

“The gravel keeps it steady,” said Monet Scroggins, one student from Dayton, Ohio.

Jason Church of the park service’s National Center for Preservation Technology and Training said Chalmette’s cemetery is in a more industrial area than most national cemeteries. It’s bounded by an oil refinery and a sugar refinery beside the Mississippi River.

He said more than 260 headstones have been realigned, though recent storms soaked the soil so much that few could be re-seated this week. “We’re hitting water at 4 inches deep,” Church said recently.

Volunteers made up for that by cleaning 600 to 800 headstones a day, he said, so that more than 5,000 headstones and well over 1,000 smaller markers had been cleaned days before Friday’s project close.

The 6-inch tall markers aren’t much higher than the fire ant mounds and mudball “castles” of crawfish burrows dotting the grounds.

In total, Amabile tallied up 14,121 headstones and markers at the cemetery. Wallisch said about 7,300 Union soldiers and sailors are buried at the site. All died somewhere in Louisiana during the war. The remaining graves hold military personnel who served in eras through the Vietnam War.

Nearly 130 Confederate soldiers also were buried in a mass grave at Chalmette but were moved after the war when Congress passed a law stating only Union soldiers could be buried in the national cemeteries, Wallisch said. Nearly 7,000 African-American civilian graves also were relocated, she said.