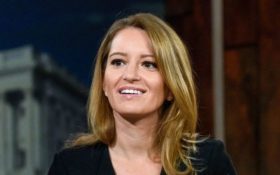 The Democrats impeachment effort against President Donald Trump is having the opposite effect on voters — and so many Americans are flocking to the president’s rallies, even MSNBC star reporter Katy Tur is impressed.

Tur was caught on a hot mic on Tuesday grinning and gushing about the crowd’s size at Trump’s political rally in Hershey, Pennslyvania.

“This is the biggest crowd I’ve ever seen!” a smiling Tur is heard saying.

This isn’t just any journalist impressed by a political rally’s size, either. Tur has been an outspoken critic of conservatives and Republicans for years. She once suggested Democrats move voters from California to middle America to help defeat Trump.

Tur once even tried to goad a Sen. Chris Murphy, D-C.T., into calling the president a terrorist.

Of course, the American people aren’t buying the mainstream media’s liberal spin. In response to the Democrat-led impeachment inquiry, Trump’s support has soared among registered voters.

Thousands and thousands waited hours in the rain to join his rally in Pennslyvania this week.

And when the mics are off, even MSNBC’s far-left stars can’t help but admit they’re in awe of Trump’s support.

You can see the hot mic moment here —

Katy Tur on tonights Trump rally: "One of the biggest I’ve ever seen"pic.twitter.com/TzHqey71l3