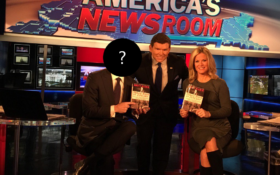 The network won’t bring in an outsider. Instead, the network chose one of its own dedicated anchors to take over Smith’s timeslot — meaning a shake-up is coming to the current daily lineup.

Bill Hemmer, who co-hosts Fox News “America’s Newsroom” at 10 a.m. with Sandra Smith, will get his own show in the 3 p.m. slot. Smith will get a new co-host.

The new 3 p.m show will be entitled “Bill Hemmer Reports.”

In response to the news, Hemmer himself said, “As a journalist, l am extremely grateful for this opportunity. 2020 will undoubtedly be a year of great significance. Leading our breaking news division with a signature hour has enormous value to me, personally, and to our audience. We’ve got a fantastic team here and I am excited to get to work.”

President of Fox News Media, Jay Wallace, had this to say of Hemmer: “Bill is an incredible newsman and his ability to cut to the heart of the story while humanizing major events has made him a standout talent in news.”

“As we start gearing up for the 2020 election, we are thrilled to have him lead our news division through what will sure to be an eventful year.”

Hemmer has been with Fox News since 2005, after previously working at CNN. Fox says the empty seat on “America’s Newsroom” will feature a rotation of anchors until a permanent replacement is named. Hemmer was the co-founder of “America’s Newsroom,” which began in 2009.

Smith, who had become known for battling Fox’s prime-time news program hosts, abruptly quit the network in October. Fox said that under Hemmer, the show would remain news and not an opinion program.

Hemmer will lead all breaking news coverage for the network as part of his new role, according to Fox News.

He will debut on the program Jan. 20.