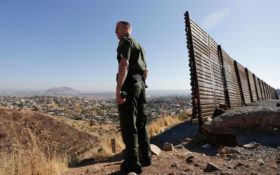 It’s the horror of horrors: A sex trafficked 10-year-old girl was smuggled from Guatemala and found at the United States border, and according to a medical professional she was raped at least 20 times en-route.

She arrived at the border with another person who claimed to be the little girl’s family member, the medical professional told Big League Politics. But when interrogated, the story fell apart and the U.S. Border Patrol agents rushed to reunite the little girl.

According to the report, she was repeatedly raped on the trip to the U.S. southern border.

“There was a female, 10 years old, who was found with 20 different types of semen inside her body,” the professional told Big League Politics. “She was dispatched to a family member. The girl who was with her who was supposedly a family member was not really a family member, just someone who bought her from her family in Guatemala.”

“These are real problems that exist here on the border. There are some people who are trying to leave jugs of water out here for them. A lot of these people come to this country needing help,” the professional stated.

Once an illegal immigrant is released, a court date is set to review their asylum claims — but 90 percent of asylum seekers fail to appear to their first court date.

The medical professional went on to tell Big League Politics about the medical problems that migrants often suffer, and how their needs have overwhelmed the U.S. border.

“There are a lot of people who come here from El Salvador, Guatemala who are in acute renal failure, they cannot walk. There are some who have come with cirrhosis of the liver. I’ve seen some patients who are almost at the point of dying with the cirrhosis that they have,” he reported. “The time and resources it takes up to treat them is massive.”

“A lot of these children come over here sick, you don’t catch the flu overnight, there’s an incubation period. A lot of these kids are already sick coming here. Right now, at least 2 percent are being taken up by people who are coming here illegally, somehow someway they do have insurance.”

“We’re guessing that as soon as they come over here they get some kind of insurance, whatever they are not given we have to foot the bill here, and they are illnesses they have had for a while,” he said.