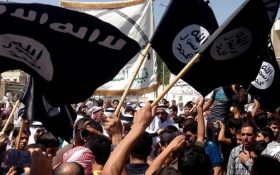 It’s the part of the border crisis the left WON’T talk about.

And it’s the key reason more security is desperately and urgently needed.

Because hidden among the asylum-seekers… sneaking in through the same path as the illegal immigrants and refugees… are some of the worst-of-the-worst radical Islamic terrorists.

One new report finds that Mexico is desperately searching for multiple alleged ISIS militants trying to slip in through that country and then take advantage of overwhelmed guards and understaffed checkpoints at the U.S. border to sneak into America.

In a report from Breitbart News that has been all-but-ignored by most of the mainstream media, police and military in Mexico say they’re looking for at least three ISIS-linked militants.

Judicial Watch said the group was last spotted in Nicaragua, where they were captured by the military after sneaking into the country illegally from Costa Rica… except they named FOUR suspects.

Since they had come from Costa Rica, they were sent or are being sent back to Costa Rica.

And that’s where the trail ends. Since they somehow had legal permission to be in Costa Rica, it’s not clear if they remain in custody there or if they have been released.

But in any case, it seems quite unlikely that they simply gave up and went back home to Egypt and Iraq.

Given the porous borders in those remote regions, the concern is that they may be looking for another way in.

And now, Mexican officials are on high alert at the highest possible levels, according to documents obtained by Breitbart, which cite U.S. Homeland Security as the source.

“It is a memo from U.S. security agencies, and it is common to receive such alerts,” Mexico’s Public Security Secretary Alfonso Durazo confirmed to Telemundo, according to Breitbart. “It does not necessarily mean that the people were pretending to enter (Mexico) … and of course in the eventuality that they tried to enter the country, they would be detained under this alert.”

But this alert is now getting attention at the absolute highest levels of government – and with the nation’s president now weighing in, it looks like something more than just a “common” security bulletin.

Mexican President Andres Manuel Lopez Obrador told the Reuters news agency that his security cabinet was investigating reports and would detain them if found in Mexico.

Other recent reports indicate that this is hardly a first – and that ISIS may be counting on using Mexico to sneak its fighters into the United States.

One militant detained in Syria said he was part of a 2016 plot to sneak into the United States via Mexico in an attempt to target banks.

He said the mastermind of this plot was already in the United States.

“That information, the plan came from someone from the New Jersey state from America,” he was quoted as saying. “I was going to take a boat [from Puerto Rico] into Mexico. He was going to smuggle me in.”

He ultimately didn’t take part in the plot.

As the reports out of Central America show, others are still out there, highlighting the urgency for more resources at the border, including more guards with a better ability to scan, screen and – as appropriate – detain and deport potential criminals.

But if Democrats keep playing politics and refusing to fund needed security upgrades, that border will be dangerously easy to cross.