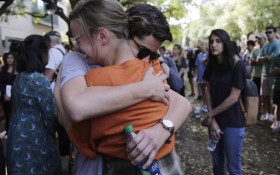 A 17-year-old homeless man has been arrested and will be charged with murder Friday in the killing of a University of Texas dance major whose body was recovered in the heart of the bustling campus — unnerving one of the country’s best-known schools.

“We are very certain that the subject we have in custody … is responsible for the death of this beautiful young woman,” Acevedo said at a campus news conference.

Weiser — described by a former dance teacher as having a “dancer’s soul” — was last seen leaving the campus drama building Sunday night. Her body was found Tuesday in a creek near the alumni center and UT’s iconic football stadium, an area bustling with activity day and night.

Police released surveillance video that showed a man they said was a suspect walking a women’s bicycle. Firefighters recognized the man on the video as Criner, whom they had spoken to in connection with a trash fire on Monday. An Austin resident who reported the fire also called police when she saw the surveillance video, Acevedo said.

Criner wasn’t arrested for the fire but was instead taken to a shelter. Police found him there Thursday and arrested him without incident. Acevedo said his clothing matched that of the man on the surveillance video and that he was in possession of a women’s bike, as well as Weiser’s duffel bag and some of her other belongings.

Acevedo wouldn’t speculate on motive and said authorities are still working to determine Criner’s criminal record. An autopsy showed that Weiser had been assaulted, but police have refused to release further details about her death, except to say that the route she took from her dorm to the drama building often passed Waller Creek, where her body was found.

University President Greg Fenves has called Weiser’s slaying “horrifying and incomprehensible” and an attack on the entire campus. He said Friday that increased police patrols on campus, which have included Texas state troopers in cars, on bikes and on horseback, would continue. The Department of Public Safety also conducted a security review on campus, including checking video monitoring, lighting and building security systems.

Fenves said the arrest “brings a tremendous sense of relief to our students, our faculty, our staff and the entire University of Texas community.”

The university held a vigil in Weiser’s honor Thursday night and Fenves said he met her parents.

“We will honor Haruka’s life and what she stood for,” Fenves said. “We will take this as an occasion to do as Haruka’s parents asked us to do, learn from this and make this a better community and a safer community for everyone.”

The university said that Weiser’s was the first on-campus homicide since former Marine Charles Whitman climbed to the top of UT’s bell tower on Aug. 1, 1966, and opened fire, killing 14 people and wounding scores of others. Authorities later determined Whitman also killed his wife and mother in the hours before he went to the tower. A 17th death would be attributed to Whitman in 2001 when a Fort Worth man died of injuries from the shooting.

Weiser’s family said she had planned to take on a second, pre-med major soon and to travel to Japan this summer to see family.

“She was so happy to be a student at UT and was looking forward to the opportunity to perform again as a dance major,” they said in a statement. “We know Haruka would not wish for us to be stuck in sadness but to keep living life to the fullest. That is what we will try to do in coming days.”