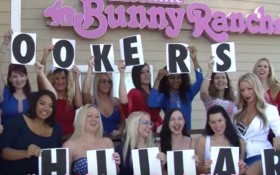 Democratic presidential candidate Hillary Clinton has been working feverishly to lock up the female vote — and it looks like she’s gotten one unusual bloc of women to come over to her side.

By helping Clinton become president, these women are helping themselves. That’s what “Entice Love,” an enthusiastic Clinton supporter and member of the political group “Hookers 4 Hillary” had to say in a recent interview with The Guardian about her group’s mission in supporting Clinton’s 2016 presidential bid.

Love continued, “When I’m looking at who I want to pick for the presidency, I look at what are they doing that I can relate to that will be of benefit for me.”

The political group is based out of the infamous Bunny Ranch brothel in Nevada, where former NBA star Lamar Odom was found unconscious last year.

According to the Hookers 4 Hillary website, the group plans to campaign aggressively for Clinton and perform media appearances plugging her candidacy.

The support of these “women of the night” isn’t exactly the push Clinton was hoping for in Nevada.

Despite winning Nevada handily in 2008, Clinton has seen her lead in the 2016 race slip leading up to the Feb. 20th caucus. Recent polls show Clinton locked in a dead heat with Vermont Sen. Bernie Sanders.

Clinton herself is rapidly working her way through Nevada, stopping at Elko on Monday and heading to Reno shortly thereafter, looking to expand her support among Nevada’s multiethnic communities that make up her base.