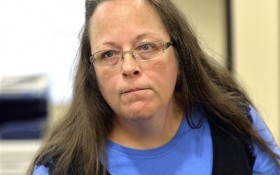 Pope Francis’ private meeting with controversial Christian figure Kim Davis was embraced by conservatives, Catholics and evangelical Christians across the country as an inter-faith outreach moment of support. But now, under media pressure, the Vatican began distancing Pope Francis from Davis.

Davis is a Kentucky county clerk who was jailed for refusing to issue same-sex marriage licenses, which became a focal point in the freedom of religion debate in the U.S. She was personally greeted by the pope in Washington, DC on Sep. 24th.

“The pope did not enter into the details of the situation of Mrs. Davis and his meeting with her should not be considered a form of support of her position in all of its particular and complex aspects,” a Vatican spokesman said.

A judge ultimately freed Davis on the condition she not interfere with her deputies issuing the licenses. Davis has since been freed and has returned to work.

Davis said earlier this week that she and her husband met briefly with the pope at the Vatican’s nunciature in Washington and that he encouraged her to “stay strong.”

“Just knowing that the pope is on track with what we’re doing and agreeing, you know, it kind of validates everything,” she told ABC.

Davis’ lawyer, Mat Staver, told the Associated Press that the Vatican initiated the meeting as an affirmation of Davis’ right to be conscientious objector.

“We wouldn’t expect the pope to weigh in on the particulars of any case,” Staver said Friday.

He said Vatican personnel called on Sept. 14, the day Davis returned to work, saying the pope wanted to meet her. He said Vatican security picked up her and her husband from their hotel and told her to change her hairdo so she wouldn’t be recognized since the Vatican wanted the meeting kept secret.

Staver disputed a Vatican spokesman’s claims that the pope only met Davis in a receiving line. He said the couple was in a separate room with Francis and Vatican personnel.

News of the meeting sent shockwaves through the U.S. church, with Davis’ supporters saying it showed the pope backed her cause.

As he left the country, Francis told reporters who inquired that he did not know specific cases in detail, but he defended conscientious objection as a human right.

“It is a right. And if a person does not allow others to be a conscientious objector, he denies a right,” Francis said.