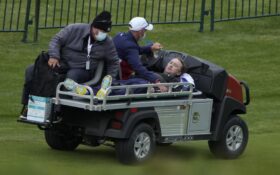 The biggest story out of the international Ryder Cup on Thursday wasn’t from the professionals — it was from the celebrity tournament.

British actor Tom Felton, known for his portrayal of Draco Malfoy in the “Harry Potter” movies, had an undisclosed health emergency on Thursday.

According to reports, Felton collapsed while playing in the celebrity golf exhibition at the Ryder Cup.

Ryder Cup organizers said only that Felton experienced “a medical incident” at Whistling Straits and was rushed to a local hospital for treatment. They provided no other information.

Felton was on the 18th hole when he went down. He was helped to his feet, placed on a stretcher, and driven away in a golf cart. He turned 34 on Wednesday.

Felton was representing Europe in the celebrity match, which is held the day before the U.S. and Europe start the Ryder Cup.

He has appeared in a number of movies, most notably eight films in the “Harry Potter” series.

On the course Friday, the Europeans enjoy a considerable edge in experience, with only three rookies to the Americans’ six. Europe also boasts the world’s No. 1-ranked player in Spaniard Jon Rahm.

But the United States is still favored, with eight of the remaining nine. The average European ranks 30th; the average American comes in at ninth. According to golf’s most reliable metric — strokes gained — Yanks top the list in driving (Bryson DeChambeau), approach play (Collin Morikawa), sand saves (Brooks Koepka) and scrambling (Patrick Cantlay).

“We all know in Ryder Cups, there’s a fine line between playing too much, trying to stay fresh, fine line, 36 holes a day,” Harrington said. “Obviously, I have a slightly older team. … You don’t see them having any issues with playing 36 holes if they have to. But yeah, it’s something I would be aware of, that we don’t want to burn players out.”

The U.S. has lost nine of the last 12 competitions to Europe dating to 1995. They’re hoping an unusual home-field advantage — COVID-19 travel restrictions have barred almost all European fans from attending — will push their young team over the top.

But for a team seeking to maximize home-field advantage, the choice of Whistling Straits was a curious place to begin turning things around.

Granted, it’s close by U.S. captain’s Steve Stricker’s home base of Madison. But the weather-beaten, heavily-mounded two-mile stretch of hard turf by the Lake Michigan shoreline is practically a replica of the seaside links courses that dot the coasts of the United Kingdom and Ireland, complete with the howling winds.

The only thing that would make the Europeans feel more at home might be a fish and chips stand.

“If the wind and the weather stays as it is, I think the Europeans stand a really good chance,” said William May, who moved to Milwaukee from Bath, England six years ago. “It feels very English to me.”

Because of travel restrictions imposed by the pandemic, May won’t have much company. Harrington went out of his way to welcome those hardy souls during Thursday’s opening ceremonies.

“To those who have made it,” he smiled, “we appreciate your efforts.”

But the visitors weren’t relying on their fans for entertainment. In addition to the usual parlor games in the team room — cards and ping-pong — the Europeans charmed the locals during a practice round earlier this week by emerging from the tunnel and onto the first tee wearing foam Cheeseheads and Green Bay Packer-themed hats and polo shirts. They also scored a decisive victory in the social media battle, topped off by this one.

But while they may look a lot looser from a distance, Casey, playing in his fourth Cup, said they’ll the Europeans will be all business when they step on the first tee.

“I don’t think our switch flips that much as much as you think,” he said. “There’s still a lot of fun and humor. But we’re very serious in our preparation. We try to leave no stone unturned because we know the margins are so small.

“You know,” Casey added a moment later, “you can look up World Rankings and all these things, but we all know, it could be down to one putt or a fraction of a shot every day that’s going to make the difference.”

MUST READ: This nasty rivalry will win it (or lose it) for USA