Hollywood liberals kiss up to Hillary - The Horn News 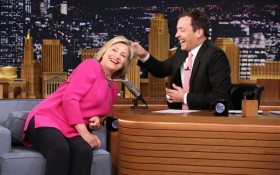 But while Clinton let the super liberal Fallon fawn over her on national television, Trump spent his night engaged in something we’re yet to see out of Clinton.

A debate with his political opponents.

While Trump debated 10 other GOP candidates last night – and weathered their attacks for the second time – Clinton still has not taken the stage against either of her Democratic foes.

She won’t until mid-October, and even then the venue – a casino owned by Clinton acquaintance Steve Wynn – is designed to be Hillary-friendly.

The Democrats’ obsession with protecting Clinton from former Maryland Governor Martin O’Malley, who is polling in the single digits, and Vermont socialist Bernie Sanders speaks volumes about the perceived frailty of her campaign.

So instead of talking about issues, Clinton last night clowned around with Fallon, participating in a sketch where Fallon impersonated Trump and schooled Clinton on handling interviews.

During the bit, Clinton took potshots on everything from Trump’s hair to his multiple marriages.

Fallon as Trump told Clinton: “I haven’t seen you since my last wedding.”

“I’m sure I’ll see you at the next one,” Clinton said. She then asked him, “What is your stance on women’s issues?”

He responded, “I know a lot of women and they all have issues.”

It was another reminder of how dynamic Clinton can be when someone is writing her material for her.

And at least until October, that’s all we’re going to see.