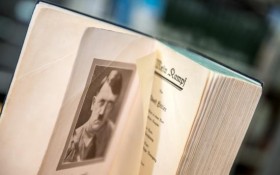 A Maryland auction house says it is selling a copy of “Mein Kampf” that once belonged to Adolf Hitler and was taken from his Munich apartment at the end of World War II.

The red leather-bound book bears an inscription signed by 11 officers from an American field artillery unit. It was kept by a soldier’s daughter until a few years ago.

“From Adolph Hitlers (sic) apartment in Munich on May 2 1945,” the inscription reads.

The book has an estimated value of between $12,000 and $15,000, but company auctioneer Bill Panagopulos said he expects the price to go higher.

“This is not a trade copy,” Panagopulos was quoted by The Daily Record of Baltimore as saying. “It’s a very special edition. It’s one I’ve never seen before.”

According to the auction house’s online catalog, a 2015 letter of provenance from the daughter of Capt. Daniel B. Allen of the 45th Infantry Division says he brought the book home with him after the war. The current seller is identified only as an East Coast collector.

The handwriting of the signatures is consistent with that period, Panagopulos said. He also said people of the time would have spelled Adolf as “Adolph” as it appears in the inscription.

Hitler wrote “Mein Kampf” — or “My Struggle” — after he was jailed following the failed 1923 coup attempt known as the Beer Hall Putsch. Millions of copies were printed after the Nazis took power in 1933. The rambling tome set out his ultranationalist, anti-Semitic and anti-communist ideology, which would culminate in the Holocaust and a war of conquest in Europe.