Hit the road, Jack! 7 GOP candidates who should drop out TODAY - The Horn News 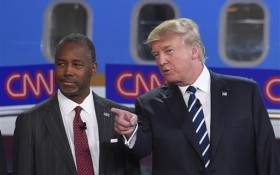 While all eyes were on the Republican presidential debate this week, one thing has become painfully clear: the crowded GOP field has become a bit of a national laughingstock.

As the GOP tries to accommodate a 15-person field, the public is getting little chance to learn about any of the candidates. And as the candidates all struggle to be heard, they’ve turned to brash attacks on each other rather than focusing on defeating an eventual Democratic opponent.

It’s time to thin the herd. And here are seven candidates who may be (or should be) primed to drop out:

They say nice guys finish last and South Carolina Senator Lindsey Graham seems out to prove it. He may be one of the most likable candidates in the race, but Graham is polling right around the freezing temperature of water – zero. Graham has always been a self-promoter, and his candidacy was a way to feed his ego and pick up some media hits. But play time is over.

As a moderate, pro-choice Republican who hasn’t been in office for nearly a decade, it was never entirely clear what Pataki’s end game was. The former New York governor may have been trying to bring a more centrist voice to the Republican primaries – or increase his profile with an eye toward an eventual cabinet position. But his abysmal polling numbers prove he’s probably not succeeding on either front.

He can’t even get on the main stage for the GOP debate and reportedly has less cash than former Texas Governor Rick Perry had before he dropped out. It looks like Santorum’s time as a GOP star has come and gone. He’s only 57 and we may not have heard the last of Santorum. But he seems to have no chance of resurrecting his 2016 bid.

The Louisiana governor flirted with a run in 2012, and may have missed his window. Jindal was once seen as a rising star in the Republican Party, but even conservatives are calling his management of Louisiana’s economy a disaster. Jindal’s candidacy now seems to be focused on attacking Donald Trump – a desperate strategy that isn’t working.

Has anyone looked more uncomfortable during GOP debates than Scott Walker? The Wisconsin governor’s campaign has been filled with gaffes – including an apparent openness to building a border wall with Canada. Walker remains a conservative hero for taking on unions in his state and surviving a recall funded by Big Labor. But he’s not ready for prime time, and voters have noticed.

Here’s something that may come as a surprise to Mike Huckabee supporters – even Mike Huckabee knows he can’t win. The former Arkansas governor is in the race to keep a focus on conservative values and issues of importance to the GOP’s Christian base, like abortion. But better-polling candidates like Dr. Ben Carson seem ready to carry that mantle. Huckabee can probably do more good for the conservative movement by resurrecting his television career than hanging around as a middling candidate.

There’s always been a question about how the outspoken New Jersey governor’s style would “play in Peoria.” And now we know – poorly. Christie was supposed to be the brash loudmouth in the campaign – a trait that appeals to a certain segment of voters – but he’s been totally outdone by Donald Trump. Despite being well known nationally, Christie’s numbers aren’t budging from the low single digits. The mountain seems a bit too high for him to climb.

If you agree or disagree, we’d love to hear your opinion in the comments section below.