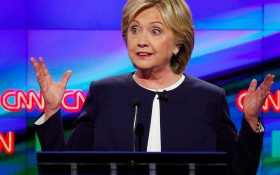 The verdict is in on last night’s Democratic presidential debate, and the ruling is clear — former Secretary of State Hillary Clinton told some big whoppers.

Here are her five biggest lies from last night:

Lie #1 – On her email practices

Clinton said, “I have been as transparent as I know to be. … I said I have answered all the questions.”

Here are the facts – Clinton has yet to explain how the server was set up and serviced, whether she informed the State Department about her decision to use the private system and, most important, how it was protected from hacking attempts.

Russia-based hackers tried at least five times to trick her into infecting her computer system with malware in 2011, and her server was hit by attempted cyber intrusions in 2014 from China, South Korea and Germany.

Her server also was connected to the Internet in ways that made it more vulnerable to hackers. But her campaign has repeatedly declined to address these details.

Lie #2 – On her college tuition plan

Clinton said, “My plan would enable anyone to go to a public college or university tuition-free. You would not have to borrow money for tuition.”

Here are the facts – Free for the students, but someone has to pay.

Clinton and would shift more college costs onto taxpayers and away from parents and students.

Her plan is bound to cost more than the $35 billion per year over 10 years projected by her campaign. This is because more students would probably switch to public universities on the potential to graduate without debt, raising costs for the government and potentially leaving many modestly endowed private institutions in the lurch.

The potential of a debt-free education would also depend on states providing reliable money streams and controlling costs — both major sources of uncertainty. The Clinton plan would also expose a sharp generational divide. New college students would be helped, but the 40 million Americans who already owe a combined $1.2 trillion in education debt would receive little aid other than refinancing at lower rates.

Clinton failed to tell TV viewers about the costs to the treasury of what she proposes.

Lie #3 – On her Syria strategy as Secretary of State

Clinton said, “What I said was we had to put together a coalition … and yes, it included Arabs, people in the region, because what I worry about is what will happen with ISIS gaining more territory, having more reach, and frankly posing a threat to our friends and neighbors in the region and far beyond.”

Here are the facts – Clinton is ignoring much of the context of her coalition-building effort in Syria. It was designed to push Syrian President Bashar Assad from power, not target the Islamic State or other extremist groups fighting among the opposition.

As secretary, Clinton helped spearhead meetings of the U.S. and various Arab and European countries frustrated by the escalating conflict in Syria. The coalition was concerned primarily with helping armed opposition groups better defend themselves and directing political groups to coalesce behind a common, inclusive platform for a post-Assad Syria.

At that time, the Islamic State didn’t exist. But al-Qaeda and other terrorist groups did. And even as they gained a foothold and became increasingly prominent among the anti-Assad rebels, the coalition Clinton worked on didn’t come up with a military plan for combating them.

Clinton said, “I think that we have to look at the fact that we lose 90 people a day from gun violence. This has gone on too long and it’s time the entire country stood up against the NRA.”

Here are the facts – Clinton deliberately misled voters to think gun violence is worse than it is. There are not 90 homicides each day, because most gun deaths are suicides. While these are a violent act, they’re not a crime as some think Clinton implied.

Clinton said, “I did say, I hoped it would be the gold standard'” of trade agreements.

Here are the facts – Clinton did not say anything about mere hope in her speeches around the world in support of the trade deal. She roundly endorsed the deal taking shape.

In a November 2012 speech in Australia, she declared the Trans-Pacific deal “sets the gold standard in trade agreements,” a sentiment she echoed in many venues.

Clinton said in the debate that when she looked at the final agreement last week, “it didn’t meet my standards.”

The final agreement, however, dropped or changed some provisions that liberal activist groups — the wing of the party she is assiduously courting at this stage of the campaign — had strongly criticized.