Hillary: No such thing as illegal immigrants - The Horn News 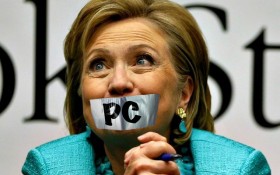 When will the political correctness insanity end?

Clinton is now claiming the term is offensive and she’s sorry for using it in the past.

Clinton said on Tuesday her previous use of the term “illegal immigrants” was a “poor choice of words” and she pledged not to use it anymore, responding to criticism from illegal immigrant activists.

The Democratic presidential candidate was asked about her use of the term to describe people who are in the U.S. illegally during a question-and-answer session on Facebook held by Telemundo.

The question came from Jose Antonio Vargas, a filmmaker and journalist whose organization, Define American, has said the terminology is offensive and asked all presidential candidates to stop using it.

“Yes, I will,” Clinton wrote during a stop in Boulder, Colorado. “That was a poor choice of words.”

Clinton has called for expanding President Barack Obama’s executive actions on immigration and overhauling U.S. immigration laws, providing a pathway to citizenship for those living in the U.S. illegally.

Her plans mark a sharp contrast with Republican White House hopefuls, who have vowed to roll back the president’s immigration orders. Many GOP candidates also routinely use the term “illegals” to refer to immigrants in the country illegally.

According to Vermont Senator Bernie Sanders campaign, the new preferred term for someone who has immigrated into the country illegally is, “Aspiring American.”