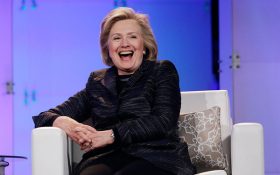 And she’s still blaming Russia for everything.

Since the 2016 election, leaders with the Democratic Congressional Campaign Committee and the National Republican Congressional Committee have negotiated on a coordinated defense against hacks and cyberattacks from foreign powers, but the talks crumbled last summer amid accusations from Republicans that liberals were grandstanding on the issue.

I say this as a former Secretary of State and as an American: the Russians are still coming. Our intelligence professionals are imploring Trump to act. Will he continue to ignore & surrender, or protect our country?https://t.co/Z6uaSCgdF6

Of course, Russia’s meddling wasn’t just the 2016 election. And they weren’t the only country to do so.

And they weren’t pushing Trump; instead, they were pushing for chaos.

Russia, for example, gave ample help to the Clinton campaign. They organized post-election protests with liberal Hollywood stars that called for our democracy to be overturned. Their anti-Trump message was shared with glowing reviews by legacy media giants MSNBC and CNN.

Meanwhile, the mainstream media helped them hide the truth — it’s the Clintons are the true lapdogs of Russian dictator Vladimir Putin.