LOCK HIM UP! Liberal filmmaker allied with anti-Trump Russian trolls - The Horn News 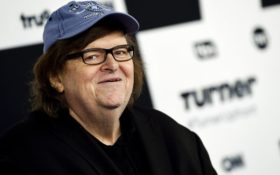 The left is being manipulated at the hands of Russian trolls — and the liberal “useful idiots” are marching in lockstep with the country’s anti-American goals.

Documentary filmmaker Michael Moore, an outspoken liberal, has long claimed that President Donald Trump colluded with Russians — but, ironically it was this liberal celeb was caught participating in an anti-Trump protest organized by Russians in November 2016.

As Trump says, Russia has succeeded in creating chaos within the U.S. — beginning and ending with their presidential election meddling, which they used to attack both sides of the political aisle.

On Friday, prosecutors announced that 13 Russians were indicted for meddling into the presidential campaign. Officials also explained that those same Russians were behind anti-Trump rallies that took place during the election.

In an indictment signed by Special Counsel Robert Mueller the government alleges that the defendants organized a Nov. 12 “Trump is NOT my President” rally in New York. Their “strategic goal” was to “sow discord in the U.S. political system,” the indictment said.

Fox News reported Tuesday morning that Moore, who has long accused Trump of colluding with Russians, posted videos and pictures of himself participating in a protest in Manhattan that was allegedly organized by Russians in November 2016.

EDITORS NOTE: Before the mainstream media picked up the story, The Horn News first reported on Moore coordinating an anti-Trump rally with Russia in November 2017.

On Nov. 12, Moore tweeted out this anti-American photo —

Snowflakes such as Moore are to blind to see the truth. Since the election, liberals have been manipulated by Russia to form a so-called “Resistance” movement, and Trump has been their target.

On Sunday, Trump tweeted out this warning to Americans —

If it was the GOAL of Russia to create discord, disruption and chaos within the U.S. then, with all of the Committee Hearings, Investigations and Party hatred, they have succeeded beyond their wildest dreams. They are laughing their asses off in Moscow. Get smart America!

As Trump said, it is time for America to get smart! The chaos will not resolve until Americans destroy Russia’s chances of disrupting our government.