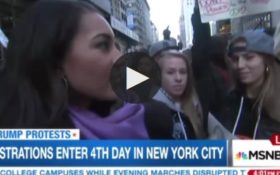 MSNBC star Alex Witt couldn’t get enough of the story. Americans taking to the street to protest President Donald Trump, calling for his removal from office and chanting ugly, unpatriotic slogans?

She and reporter Morgan Radford, as well as their rivals at CNN, reportedly breathlessly on the angry protests that swept across New York City on Nov. 12, 2016.

The only problem? The anti-Trump event wasn’t organic liberal rally against the results of our nation’s presidential election.

This was part of an information attack on America by a hostile foreign power. And CNN and MSNBC stars were enthusiastically playing along, broadcasting this nasty message into millions of U.S. homes, hour after hour after hour.

If liberal protesters were the rats to Putin’s anti-American piped piper scheme, then MSNBC and CNN both volunteered to give him the most powerful microphone they owned.

They called it a “love rally” and repeated the message that America must “reject the President-elect” and that U.S. citizens must stop Trump from taking office.

“Of course, none of the networks were aware of who was allegedly behind the march, but CNN and MSNBC reveled in the inflammatory messages of the march. At one point, MSNBC anchor Alex Witt credulously responded to the ridiculously alarmist rhetoric,” NewsBusters reported.

“That woman, when she’s saying she’s concerned that black people will be shot in the street… Is that a legitimate concern for her!?” Witt asked reporter Morgan Radford. “Because that’s scary!”

The goal of these secret Russian agents was never to elect Trump. It was to sew chaos in our streets. To push violent nonsense into the American political landscape and weaken our nation from within.

On Nov. 12, CNN and MSNBC did more to help Putin than anyone could have imagined — and history shows that it worked like a charm.

See The Horn News’ chilling recap of the post-election violence that CNN, MSNBC and Russian foreign agents worked together to bring to the streets of America.