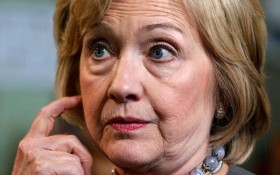 Former Secretary of State Hillary Clinton, who has long been accused of cheap pandering to minority voters, caused an outrage among Latinos this week by comparing herself to their grandmothers.

Clinton’s campaign released a condescending article targeting Latinos called “7 things Hillary Clinton has in common with your abuela.” “Abuela” is a Spanish term for “grandmother,” a position of high reverence in Latino cultures.

The article showed pictures of Clinton doting on her grandchild. But critics say it’s part of a larger trend among Clinton’s outreach strategy to Latinos.

She simply throws in an occasional Spanish word in blog posts and speeches as evidence that she understands Latino issues. In fact, her campaign released videos and GIFs showing Clinton using the strategy.

But comparing herself to Latinos’ grandmothers appears to have been a step too far. Social media users quickly started attacking the Clinton campaign with tweets and Facebook posts under the hastags #notmyabuela and #nomiabuela.

Here are some of the best responses to the Democratic frontrunner.

#NotMyAbuela Instead of standing there while he lied, my Abuela would have beat him and left him crying pic.twitter.com/lHK95WOcIF

You know who I’m most angry at? Whoever Latino aide in Hilary’s camp who thought this pendejada was campaign gold #NotMyAbuela #NoMiAbuela