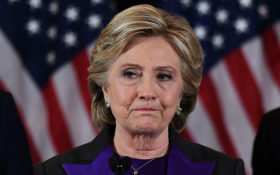 Former first lady Hillary Clinton has found a brand new way to make money. In fact, she has not one, but two new jobs.

Clinton has been given two posts at a prestigious, Ivy League university.

“The former U.S. Secretary of State will hold two appointments as a professor of practice at the School of International and Public Affairs and a presidential fellow at Columbia World Projects,” announced Columbia University last week.

As Secretary of State, Hillary Clinton’s signature accomplishment was pushing President Barack Obama, who ran as a peace candidate, to surge thousands more troops into Afghanistan and keep the conflict going his entire two terms. As first lady, she gave a keynote address at a UN international conference on women’s rights…in China, the home to forced abortion and human trafficking.

Hillary said she can’t wait to begin “educating the next generation of U.S. and global policy leaders, translating insights into impact, and helping to address some of the world’s most pressing challenges.”

The university’s president admitted the appointment reflected their cozy personal relationship. “I have had the great pleasure of knowing Hillary personally for three decades, since her early days as First Lady of the United States,” said Columbia University President Lee Bollinger. He gushed about “her extraordinary talents and capacities together with her singular life experiences, Hillary Clinton is unique, and, most importantly, exceptional.”

Hillary Clinton is exceptionally talented at raking in high-paying, high-status contracts and positions.

She also recently taught a Masterclass on “The Power of Resilience,” where she broke down in tears reading her 2016 “victory speech” to her deceased mother.

But Hillary Clinton has not restricted herself to a classroom: She’s tried her best to become a global star of word, stage, and screen.

In 2019, she and daughter Chelsea Clinton teamed up to write The Book of Gutsy Women, which praised people the duo considered groundbreaking historical women such as Ellen DeGeneres and Greta Thunberg.

It was the latest in a line of multimillion-dollar book deals.

Simon & Schuster gave Hillary Clinton a $14 million advance to write Hard Choices in 2014. That came after it shelled out $8 million for her previous book, Living History. They were followed by her book-length explanation of why she blew the 2016 presidential election, What Happened, in 2017.

In 2021, Hillary Clinton announced she is writing a murder mystery novel called State of Terror with Louise Penny, the best-selling Chief Inspector Armand Gamache mystery series. (Teaming up with authors, who may be ghostwriters, is a family trait: Bill Clinton allegedly wrote a series of suspense novels with James Patterson.)

And let’s not forget, she won a Grammy award for her reading of her book It Takes A Village in 1997.

More than anywhere else, Hillary has friends in Hollywood.

In 2018, Stephen Spielberg announced she would join his Amblin Productions to produce a series for the CW based on “The Women’s Hour.”

In 2020, Hulu announced it was developing a series called Rodham, an alternative history where Hillary Rodham never met future president Bill Clinton while they studied together at Yale Law School. Last May, the streaming service announced it had decided not to produce it.

Still, Hillary Clinton got a producer or “executive producer” credit, and the check to go with them, on two documentaries in 2022: the series Gutsy “starring” her and Chelsea discussing their book, and In Her Hands, about a female mayor in Afghanistan before it collapsed.

She’s also listed as producer of a documentary that’s been completed but not yet released titled Below the Belt. Despite its name, it is not about her husband, but about women suffering from edometriosis.

Her “charity,” the Clinton Global Initiative, raked in millions of dollars from foreign donors during her time in office, as well as her campaigns for the nation’s top office.

The most controversial deal came with “Uranium One,” which traded a massive share of America’s uranium stockpile to Russia. Even The New York Times admitted, “Uranium investors gave millions to the Clinton Foundation while Secretary of State Hillary Rodham Clinton’s office was involved in approving a Russian bid for mining assets in Kazakhstan and the United States.” Many of those “investors” happened to be Russians who stood to profit from the deal she arranged.

The years of impropriety had tens of thousands of people chanting, “Lock her up!”

Now, in addition to teaching, Clinton is trying to rev up the “charity” once again. “After going dark during Hillary Clinton’s 2016 presidential campaign, the Clinton Global Initiative is back,” announced The New York Times last September.  Even liberal Puck News admitted the non-Hollywood CGI “generally appears either as a powerful platform for worldwide social engagement or a palm-greasing McKinsey mosh pit of E.S.G.-fluent International Baccalaureate-credentialed bankers.”

Hillary Clinton failed in multiple presidential campaigns, accomplished little as a senator and even less as Secretary of State, but she’s succeeded fabulously at the undertaking that means the most to her: squeezing every dollar available about of her family’s waning political power.

Maybe she should teach a course in corruption and influence-peddling instead?