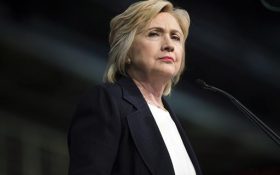 Hardcore liberals and conservatives rarely agree on anything – but around the world, both sides are united on one issue: electing Democratic presidential candidate Hillary Clinton would doom the planet into yet more endless wars.

In what just might be the world’s strangest endorsement, the left-wing website Common Dreams has adopted the slogan “Vote for the Lying Neoliberal Warmonger: It’s Important!”

Meanwhile, the hawkish establishment conservatives behind the nation’s failed policies in Iraq can’t get behind Hillary fast enough.

“It’s important to make it clear how unacceptable (Trump) is,” he told Der Spiegel magazine.

“I would say that a majority of people in my circle will vote for Hillary,” agreed Robert Kagan, cofounder of the neocon think tank Project for the New American Century, according to The Intercept.

And that has citizens around the world nervous.

Clinton’s hawkish track record speaks for itself, starting from her vote as senator for the disastrous invasion of Iraq and her role as secretary of state in allowing the situation there to spiral out of control.

She was also the leading voice in the Obama Administration for intervention in Libya – and after Muammar el-Qaddafi fell, she arranged a quick trip there for a high-profile victory dance.

“I am proud to stand here on the soil of a free Libya,” she announced, according to The New York Times. “It is a great privilege to see a new future for Libya being born.”

These days, she’s not nearly as keen to talk about Libya.

She’s also pushed for a more aggressive stance against Syria and has been flip-flopping like a fish out of water on the possibility of increasing U.S. ground troops in Iraq to fight ISIS.

Donald Trump’s “America First” strategy, on the other hand, is solidly against the nation-building interventions of Clinton and the Bush neocons.

“I do think it’s a different world today and I don’t think we should be nation-building anymore,” Trump told The Washington Post earlier this year. “I think it’s proven not to work.

The anti-war left has taken notice.

The progressive magazine The Nation said Trump “could be the military-industrial complex’s worst nightmare.”

In many ways they’re right.

He has openly called for ending the absurd system where politicians push expensive programs that our own military doesn’t even want – not because we NEED these things, but because of big-money campaign donations from defense contractors.

“I will build a military bigger, better, stronger,” Trump said earlier this year. “I guarantee we can do it for less money.”

So voters in November will be faced with an unusual choice: A Democrat with a proven track record of backing and even initiating unwinnable wars… and a Republican who wants to scale back overseas and put America First at home.