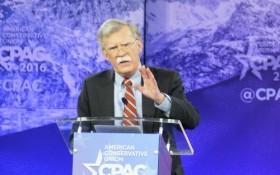 And Americans should not forget her lack of leadership when they head to the ballot boxes in November.

Bolton, who served as U.S. ambassador to the United Nations during the presidency of President George W. Bush, spoke before a packed crowd this morning at the Conservative Political Action Conference (CPAC), the largest gathering of conservatives in America.

Bolton’s criticism of Clinton’s handling of Benghazi, which led to the deaths of four Americans, including Ambassador Christopher Stevens, was especially biting.

Bolton pointed out that Clinton did not contact Secretary of Defense Leon Panetta once on September 11, 2012, the day of the attack, and instead went home.

And she refused to face the music and answer questions on Sunday talk shows after it was clear that a serious tragedy had unfolded in Benghazi, instead dispatching underlings.

“This is not what we need in a commander-in-chief,” Bolton said.

Clinton’s improper handling of classified information on a homebrew email server also shows how weak she is on national security, Bolton added.

“If she doesn’t have the wit to protect her own emails, how do we think she’s going to protect us?” Bolton added.

Bolton said that the Clinton camp has been desperately trying to portray as a “security review” what is clearly a criminal investigation by the FBI into her email practices.

“If I did one-tenth of what she did, I’d be in jail already,” Bolton said. “Hillary is in deep legal jeopardy, and she should be.”