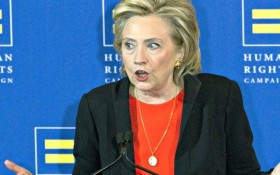 It may have been Clinton’s best soundbite of the night — but it’s also not true.

Clinton said the Islamic State group is using video of Donald Trump to recruit Muslims to its cause. But according to a fact-checking report from the Associated Press, there is zero evidence to back up her claim.

The Clinton campaign responded Sunday, admitting that Clinton’s statement on Trump in the latest Democratic presidential debate was false.

During Saturday’s debate, Clinton stated that the Republican presidential contender is “becoming ISIS’s best recruiter,” with the group attracting people by showing videos of him.

No such video exists. And Clinton’s statement that Trump is becoming the “top recruiter” for ISIS is also hard to square with the complex realities motivating its adherents.

Attackers connected to or inspired by ISIS often say their actions are in response to the airstrike campaign against Islamic State militants, whose focus is on Syria and Iraq. Shiite Muslims have been their primary target since the beginning and in their online videos, they often call out to their followers to attack infidels — Shiite Muslims in particular.

When Trump was asked about these so-called ISIS recruitment videos, he told ABC: “She just made it up.”

Clinton spokeswoman Jennifer Palmieri admitted Sunday the campaign is aware of no such ISIS video.