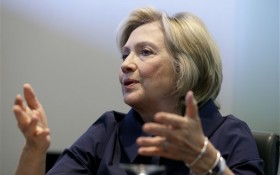 She triggered a months-long federal investigation and may have sent classified information over a private email server. But former secretary of state and presidential candidate Hillary Clinton is refusing to apologize for her email snafu — and is calling the entire incident a “distraction.”

In an interview Monday with the Associated Press during a Labor Day campaign swing through Iowa, the front-runner for the Democratic presidential nomination also said the lingering questions about her email practices while serving as President Barack Obama’s first secretary of state have not damaged her campaign.

As she has often said in recent weeks, Clinton carefully claimed during her interview that it would have been a “better choice” for her to use separate email accounts for her personal and public business.

But when she was asked recently by NBC News whether she was sorry for the trouble — and potential risks — caused by her private email system, Clinton declined to apologize. She reiterated that stance with the AP, saying “What I did was allowed.”

Last year, Clinton turned over roughly 55,000 pages of emails to the State Department that she sent and received using a home-brew email server set up at her home in suburban New York while serving as secretary of state from 2009 to 2013.

The State Department is currently reviewing those emails, and it’s now clear that some of them contained information that was later deemed to be classified.

Last month, Clinton gave the server to the FBI, along with a thumb drive kept by her attorney that contained copies of the emails.