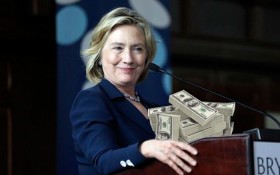 Opponents of Hillary Clinton have been warning for years that the Democratic presidential candidate is unduly infulenced by donors, and her campaign doesn’t care where it comes from.

The total corruption surrounding the Clintons can no longer be denied.

Americans United for Change has previously been exposed for illegally coordinating with the Democratic National Committee and the Clinton campaign.

For nearly two months, the super PAC hoarded the dirty cash. Last week, to cover their tracks they ended up returning the cash… but only after they’d been caught.

But as anyone that has been watching the Clinton family’s political career knows, it’s hardly surprising.