Hillary backer: US should pay for Muslim migrants - The Horn News 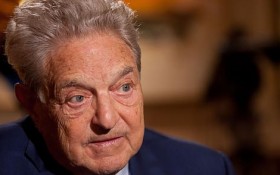 The migrant crisis is showing no signs of slowing in Europe. According to a new report from the Gatestone Institute, the Muslim population of Germany will reach 20 million in the next five years, driven largely by an influx of migrants.

Soros, who in July donated another $2 million to Hillary Clinton’s super-PAC, says on his website that the European Union and United States need to do more. He has called for a complete unification of the immigration systems across Europe and into Turkey to make it easier for migrants leaving the Middle East,

Soros’ site estimates that his plan would cost over $21 billion, of which the European Union would be expected to pay $8.7 billion, and the remaining “balance coming from the United States and the rest of the world.”

In other words, Soros is demanding the United States fork over the lion’s share of more than $12 billion towards this migrants crisis.

The Gatestone Institute, a New York-based think tank that specializes in matters of national defense, on Sunday released a report detailing the immigration flood in hitting Germany. In this report, they detailed disturbing inside information from the Germans, including a leaked German intelligence document that said, “We are importing Islamic extremism, Arab anti-Semitism, national and ethnic conflicts of other peoples, as well as a different understanding of society and law.”

According to Gatestone, the current number of Muslims in Germany, 5.8 million, is expected to swell to 20 million by the end of 2020, and that this “surge in Germany’s Muslim population represents a demographic shift of epic proportions, one that will change the face of Germany forever.”

Soros’ website has estimated each refugee heading towards Europe will cost 5,000 euros.