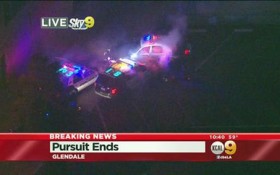 Police shot and killed a suspect who stole a patrol car and led officers on an hour-long chase across Southern California freeways that ended with a dramatic collision in an alley, authorities said.

The driver hit speeds topping 100 mph during the pursuit that was broadcast live on news stations Sunday night.

The stolen vehicle from the West Covina Police Department had its siren on, causing motorists to steer out of the way as it weaved through freeway traffic and blew through red lights on surface streets.

Investigators said Monday the chase began in suburban West Covina after a man called 911 to request police assistance and was given a ride in the backseat of the patrol car.

When officers stopped to drop off the man, he somehow got into the driver’s seat and sped away, according to the Los Angeles County Sheriff’s Department.

The man had made a “wild allegation” to dispatchers that he had been injected with some kind of substance, indicating a potential mental health issue, sheriff’s Sgt. Bill Cotter said. His name has not been released.

The pursuit ended after an hour in the Glendale area when an officer in an SUV slammed into the stolen vehicle in the alley, pinning the suspect inside as he gunned the engine, trying to escape again. Officers opened fire, killing the 45-year-old man at the scene, Cotter said.

It was not immediately clear if the driver was armed.