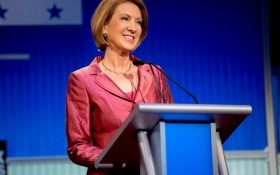 Business executive and GOP presidential hopeful Carly Fiorina is soaring in the polls and may have won herself a seat on the main stage at the September 16 Republican debate. And that could leave other candidates who are lagging, like New Jersey Governor Chris Christie, on the outside looking in.

CNN on Tuesday amended its criteria for the next Republican presidential debate, giving Fiorina a better chance at appearing.

The news network announced the change following weeks of public pressure from Fiorina and her supporters.

Fiorina, the only woman in the GOP field, likely would not have been among the top 10 candidates on the debate stage as determined by the original terms, which relied on national polling conducted between July 16 and Sept. 10. The new terms add any candidate who ranks in the top 10 in polling between Aug. 6 and Sept. 10 — a period that better reflects Fiorina’s rise in the polls, but could hurt candidates like Christie.

“We now believe we should adjust the criteria to ensure the next debate best reflects the most current state of the national race,” CNN said in a statement.

The Fiorina campaign and the Republican National Committee praised the move.

“I applaud CNN for recognizing the historic nature of this debate and fully support the network’s decision to amend their criteria,” said RNC Chairman Reince Priebus.

In a message posted on Twitter, Fiorina aide Sarah Isgur Flores thanked “the thousands of grassroots supporters and conservative activists around the country who weren’t afraid to take on the political establishment and challenge the status quo to make this happen.”

“We look forward to watching (Fiorina) debate the other front-runners at the Reagan Library,” Flores said.

While Fiorina has been rising in the polls, her place on the debate stage is not assured.

The final participants won’t be announced until Sept. 10.