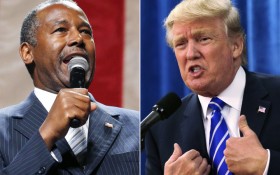 A stunning new poll shows the first major hole in billionaire-turned-presidential-candidate Donald Trump’s armor. For the first time in months, Trump is no longer ahead in Iowa. He now shares the lead with Ben Carson, with business executive Carly Fiorina gaining fast.

The Monmouth University Poll of likely Iowa Republican caucus goers finds Carson and Trump in a statistical. This marks the first time since July 26 that a poll in any of the first four nominating states has not shown Trump with a nominal lead.

The last two Iowa caucus victors, Mike Huckabee and Rick Santorum, each garner 2% of the vote. None of the other six candidates included in the poll register more than 1% support.

You can read the poll here