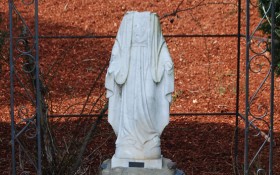 Police are investigating after the head and hands were removed from a Virgin Mary statue outside a Billerica Church just outside of Boston, MA.

This isn’t the first religious attack this week. Officers are investigating a relation between similar crimes happening in the Boston area.

Three statues were vandalized at a Catholic church in Burlington, one being a Virgin Mary statue with the head and hands knocked off.

Father Frank Silva from St. Margaret’s Church said, “The initial feeling was things have been violated in many ways, certainly from a religious and spiritual perspective.”

“We are actively investigating this disturbing crime and will continue to do so until we find those responsible” Police Chief Daniel Rosa said in a statement.