Guilty! Ex-Gov’t ‘sextortion’ employee to be sentenced - The Horn News 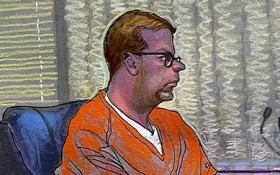 Sitting at a desk in the American embassy in London, a former U.S. State Department employee used his government-issued computer to prey on vulnerable young women and manipulate them into sharing nude photos, amassing thousands of images to make himself feel powerful, prosecutors said.

Michael C. Ford, 36, faces years in prison when a federal judge sentences him Monday for sending “phishing” emails to young women, specifically targeting members of sororities and aspiring models, and claiming to be a member of Google’s account deletion team, which doesn’t exist, to get them to hand over their passwords.

While he occasionally used the photos for sexual arousal, it was primarily about power, he told investigators.

“He stated that his wife is the ‘alpha and breadwinner’ in their family, and he was doing this to fill a ‘power void,'” prosecutors wrote in a court filing.

Prosecutors want a federal judge to send him to prison for eight years while defense attorneys are arguing for much less.

Ford’s lawyers say their client has acknowledged his wrongdoing and shown he’s committed to changing his behavior. Despite longtime struggles with alcohol and more recent bouts of severe depression, he still has strong support from his family and friends, his lawyers wrote.

More than two dozen letters written by family and friends describe him as a doting husband and loving father to his 2-year-old son. His wife is due to give birth to their second child this summer and relies heavily on his support, the letters say.

Ford used the women’s passwords to access their email and social media accounts and searched for sexually explicit photographs and personal information. He sent messages threatening to put the images online or send them to the women’s families and friends if they didn’t do what he wanted, a practice known as sextortion, prosecutors said. In several instances, he followed through on those threats.

When his victims reacted with shock or anger, he escalated his activity with taunts and threats, prosecutors said. He pushed for more explicit photos and asked them to use hidden cameras to record “sexy girls” in locker rooms and changing rooms, prosecutors said.

In a single day last April, he sent 800 phishing emails, and 180 follow-up messages to potential victims who hadn’t responded to his initial email and to 15 others who had provided incorrect passwords, prosecutors said. Another day in April, he sent initial harassing emails with photos attached to 98 new victims.

Prosecutors said one woman told investigators she considered carrying a gun because she was afraid he’d physically attack her, while another slept with a knife under her pillow.

Federal sentencing guidelines use a variety of factors to arrive at a suggested range, and the judge is not obligated to follow it. The federal probation office has recommended a range of about four to five years.

Prosecutors say Ford actually began victimizing young women in 2009 posing as a scout for a talent agency and the owner of an adult website, emailing women and asking for racy photos and personal information. He knew some of them were minors because he had their birthdates, but encouraged them to send videos anyway, prosecutors said. He also attempted to meet some in person and stalked at least one, prosecutors said.

Even though he doesn’t face charges for the earlier activity, prosecutors argue the judge should consider it when sentencing him, in part because it led seamlessly to the later activity.

Defense attorneys argue their client quickly acknowledged his wrongdoing, helped with the investigation and pleaded guilty, saving the government the time and expense of a trial.