Governor: Trump may be clinically insane - The Horn News 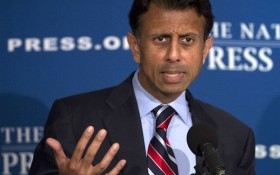 Louisiana Governor Bobby Jindal has been unloading on GOP frontrunner Donald Trump recently. But this week he took things to a whole new level with a scathing attack implying that Trump was a psychologically unbalanced madman who must be stopped.

Through an Op-Ed published on CNN, Jindal essentially questioned Trump’s mental stability, and says voting for Trump would give the White House to former Secretary of State Hillary Clinton.

Playing amateur psychologist, Jindal also claimed Trump exhibited some of the key characteristics of narcissism, including being “insecure, weak, and afraid of being exposed.”

Of course, Jindal didn’t just question Trump’s mental stability, but his intellect as well. He claimed The Donald is “not intellectually curious” and “makes it up on the fly.”

The problem with Donald Trump is that he will never be president. His nomination as the Republican candidate would gift the White House to Hillary Clinton. He would self-destruct in a general election. In fact, he may be Clinton’s only hope. And even if he were somehow to win, we have no idea how he would govern.”

You can read the article in it’s entirety on CNN here.

What do you think of these criticisms? Do you think Gov. Jindal has a point, or is this just a desperate ploy? Share your comments below.