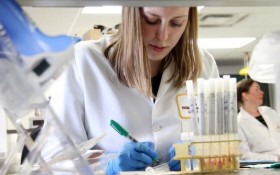 Is our government treating its own scientists like terrorists?

For years researchers at federal agencies like the FDA and USDA have warned that they’re being bullied, demoted and even fired for trying to bring you life-saving health information.

Especially when their studies could harm the bottom lines of billion-dollar drug, food and biotech companies.

President Obama vowed to put a stop to it — but dozens of scientists are learning the hard way just how much a politician’s promise is worth.

A prominent USDA scientist has been suspended and even yanked off an airplane for trying to expose the risks of genetically-modified foods.

And it looks like his shocking story is just the tip of the iceberg.

The man who knew too much
When USDA scientist Jonathan Lundgren started a career in public service, he probably thought he’d get to, you know, serve the public.

But he learned fast just who our government health agencies are set up to serve.

When Lundgren published a study on neonicotinoids — a type of pesticide that’s been linked to brain damage and has been killing off bees — our government started treating him like a Soviet spy!

The USDA poured through his emails, launched a six-month investigation into his lab, started denying his research requests, and even demanded that he stop talking to the media.

They said he had no right to publish such “sensitive” information.

Excuse me? Sensitive to who? Trust me, this information was only “sensitive” to companies like Bayer and Syngenta that are making billions selling this stuff.

But when Lundgren tried to take on Monsanto and the powerful GMO industry, things really boiled over.

Lundgren was on his way to a National Academy of Sciences meeting to talk about how GMOs are endangering American farmland and our nation’s food supply, when he was ordered off the airplane!

You would have thought he was working for ISIS instead of taxpayers like us!

The USDA made some lame excuse about how Lundgren’s paperwork wasn’t in order. And if you believe that, they have some tainted beef they’d like to sell you.

Make no mistake about it. The USDA was trying to stop Lundgren from saying anything that would harm companies like Monsanto that spend millions lobbying the federal government.

And that’s not exactly a new tactic. Just a few months ago, I told you how 10 USDA scientists were censured and ordered to retract studies about the risks of GMOs and Monsanto’s GMO-ready weedkiller Roundup.

And if there’s any good news here, it’s that Lundgren isn’t taking this sitting down.

When the USDA suspended him in August, the watchdog group Public Employees for Environmental Responsibility (PEER) filed a whistle-blower complaint on his behalf.

AS PEER Executive Director Jeff Ruch put it, “If you want to prosper at USDA, don’t make waves. When you do what Jonathan is doing, you do so at your own peril.”

I guess nothing scares our government more than people willing to tell the truth.

And the USDA isn’t the only government agency where scientists are being intimidated or told to keep quiet.

Two years ago, the EPA appointed a “scientific integrity” official who was supposed to make sure scientists were free to conduct their research without industry interference or bullying.

So far, there have been 40 EPA staff complaints and only three “minor” ones were resolved. The majority of them — 23 — were dismissed outright.

As an EPA whistle-blower said, the grievance process doesn’t exist to protect scientists. It’s to “keep complaints from going outside the government’s control.”

Take a moment to write your members of Congress and demand better protections for government scientists who are supposed to keep us safe.

Otherwise these agency officials will continue to use censorship to protect big corporate contributors, and not you and me.

You know, the ones who pay their salaries with our tax dollars.

The Health Sciences Institute (HSI) is an independent organization dedicated to uncovering and researching the most urgent advances in modern underground medicine. And you can get urgent health alerts like these delivered to your inbox every day. Just click here to claim your FREE subscription to the HSI e-Alert.