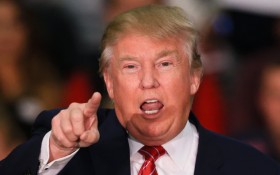 One look at the polls and it’s obvious that American voters are sick to death of business as usual.

More and more voters are flocking to support presidential candidate Donald Trump. And it’s got the bosses of the Republican Party are in full-blown panic mode. Now, reports say they’ve been holding secret meetings to discuss how to undermine the “insurgent” candidacy of Trump should he begin winning state primaries.

The Washington Post has reported that Senate Majority Leader Mitch McConnell and GOP chairman Reince Priebus quietly met with “several longtime Republican power brokers” to discuss a strategy to defeat Trump on the Republican convention floor… even if he wins many of the primaries and has the most delegates.

That doesn’t just stink. That smells so bad that longtime party loyalists are up in arms.

“I get that you need to have contingency plans in place, but this looks like they’re trying to rig the game,” Jeffrey Lord, a former Ronald Reagan administration official told The Hill. “It just feeds the narrative that the establishment is completely out of touch with the base.”

Even one of Trump’s biggest rivals has previously said that he wants nothing to do with the ugly politics-as-usual already taking place behind the scenes.

“I am prepared to lose fair and square, as I am sure is Donald,” Dr. Ben Carson told Politico. “But I will not sit by and watch a theft. I intend on being the nominee. If I am not, the winner will have my support. If the winner isn’t our nominee, then we have a massive problem.”

A longtime member of the Republican Party’s Rules Committee said the deck is already stacked in favor of the establishment’s bought-and-paid-for milquetoast candidates rather than the common-sense conservatives that voters are so desperately searching for.

Curly Haugland, a Republican National Committee member from North Dakota, said the way the rules are written, a candidate doesn’t have to win the primaries to win the nomination. He just has to win the vote of the delegates at the convention – a process that could take place behind closed doors, especially if no one has a clear majority.

Many of those delegates are longtime party members who would face intense pressure from Republican bosses. And while Trump may have written “The Art of the Deal,” he knows he’ll have a distinct disadvantage when it comes to the backroom deals of politics.

“I’d be going up against guys who grew up with each other, who know each other intimately, and I don’t know who they are, okay? That’s a big disadvantage,” Trump told the Post. “These kind of guys stay close. They all know each other. They want each other to win.”

And that means they all want Trump to lose… even if they won’t admit it in public.