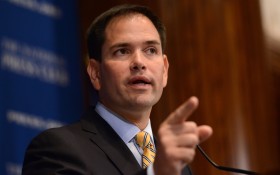 There were lots of punches delivered at last week’s GOP presidential debate — and it looks like they didn’t stop after the event was over.

A Rand Paul aide is accusing a key member of the Marco Rubio campaign of assaulting him at a bar outside of Detroit last week — and he’s demanding that Rubio take action.

An argument between the top level staffers reportedly turned physical, leading to at least one punch being thrown. One of Rubio’s staffers, deputy national campaign manager Rich Beeson, allegedly socked a Rand Paul aide named John Yob in the face at a bar.

After, Yob complained directly to the Rubio campaign, then went on social media and complained as well, identifying Beeson as the aggressor and calling for him to be fired.

“Last night I went to a bar on Mackinac Island for the GOP Mackinac Conference,” Yob said in his online complaint. “I ran into a guy named Rich Beeson, who frankly I didn’t even know who it was at first because he isn’t relevant in our political world. Anyway, he is Marco Rubio’s [deputy] national campaign manager. He literally physically assaulted me by punching me in the face. The state police are looking for him. I have it on video, from multiple angles. This will play out in the national media in the next few hours.”

Should Beeson, a high profile political aide who was seen as a major score for the Rubio campaign by political analysts this last spring, lose his job over the punch it could be a hit straight to Rubio’s campaign, which has only just started to gain national traction.

Rubio has yet to publicly address the issue.