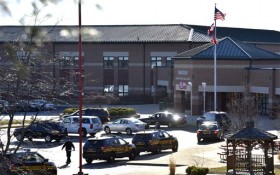 A 14-year-old boy pulled out a gun in a southwestern Ohio school cafeteria on Monday and opened fire, hitting two students, authorities said. After the shooting spree, the teenage gunman fled, only to be ultimately captured by a K-9 unit.

Two other Madison Local Schools students were injured in another way. None of the injuries appeared to be life-threatening, said Butler County Sheriff Richard Jones.

The shooter ran from the school, threw the gun down and ran into a field before he was caught by a K-9 unit, according to Journal-News. Jones said the 14-year-old was a student and there was a motive to the shooting which he did not identify.

Students were eating in the cafeteria when the shooting happened around 11:30 a.m., Jones said.

“We don’t know if it was from the shooting or from exiting the school or because of the shrapnel from the bullets hitting into that small of an area,” Jones said.

Students who were in the cafeteria at the time said they didn’t immediately recognize the sounds as gunshots. Some students ran outside to a field before being brought back inside.

A sheriff’s deputy stationed in the school had just been in the cafeteria, Jones said.

All other students were safe, according to the school website. The school, which had practiced for such an event, immediately went into lockdown, said district spokeswoman A.J. Huff.

The district was dismissing students from the junior high and senior high schools as quickly as possible following the shooting. Authorities were releasing students in groups of two or three.

The campus is near Middletown, roughly 30 miles north of Cincinnati. State records show enrollment of about 250 junior high and 500 high school students.

The Butler County sheriff asked people to stay away from the school until the scene was cleared, and nearby roads were blocked.