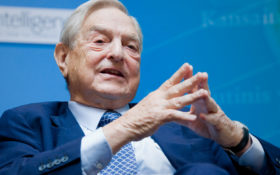 Billionaire liberal megadonor George Soros has more pull on the Democratic presidential nomination than almost anybody—and he’s decided there’s one candidate out of the 18 Democrats running for president he wants to see in the Oval Office.

This candidate would be the “most qualified to be president,” he said.

But it’s not about qualifications: This candidate would put more power in Soros’ hands than anyone else in the field because of their shady, secret family connection.

“I don’t take a public stance,” he said before adding, “but I do believe that she is the most qualified to be president.”

That a huge endorsement, since Soros is already one of the biggest donors in the 2020 presidential race. He just dropped $5.1 million to set up a new superPAC, “Democracy PAC,” to elect leftist Democrats.

Soros — who’s never shied away from his socialist, one-world politics — wanted to give Warren a soft-sell…but he’s all in for Warren.

Soros had the audacity to claim, when it comes to politics, “I don’t express my views generally because I have to live with whoever the electorate chooses.”

This is the same Soros who said “President Trump would like to establish a mafia state” and that “I consider the Trump administration a danger to the world.”

Soros has targeted Republicans for a long, long time. He said then-President George W. Bush had the “supremacist ideology of Nazi Germany,” and called defeating the Republican president in 2004 the “central focus of my life.”

He even blew $27 million of his own wealth backing Democratic loser John Kerry.

Now he feels the same way about President Donald Trump. He even took a cheap shot at Trump while backing Warren, saying “Trump is still doing a tremendous amount of damage.”

After all Bernie Sanders, Pete Buttigieg, and Beto O’Rourke also back a wealth tax, and Bernie’s always been an out-and-proud socialist. He’s even leading Warren in New Hampshire, although she’s gaining.

But Elizabeth Warren gives George Soros something the rest of them don’t—deep, built-in influence.

Soros gave $18 billion of his fortune to his Open Society Foundations…and that nonprofit has steered hundreds of thousands of dollars in political donations to a left-wing political group called Demos.

Like any organization that cashes checks signed by George Soros, it finds out his money comes with strings attached.

Demos has sued states that passed laws against voter fraud. Places like Miami’s Broward County, or North Carolina’s Wake County have more people registered to vote than people who are eligible to vote—and Demos is protecting the whole fishy status quo.

Demos also wrote the blueprint for one of Soros’ groups, the Democracy Alliance—a shadowy, super-secretive group of leftist megadonors that meets behind closed doors to set the Democratic Party’s agenda.

The Horn told you all about it last Spring... and it’s mind-blowing.

If Warren is elected president, Soros will have sway over her like no one every controlled a president in U.S. history: He controls her kid’s finances.

Elizabeth Warren’s candidacy seems to be on fire right now.

Warren is sitting on top of polls in Iowa, where she’s leading Mayor Pete by eight points—and she has room to grow. Polls show she’s almost every Democrat’s second choice, so when their candidate drops out, they’ll switch to Warren.

But she’s George Soros’ first choice…and thanks to The Horn, now you know why.