French Pres: We will be merciless against these barbarians - The Horn News 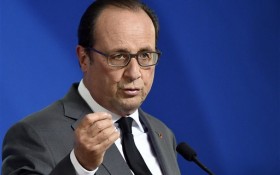 Speaking at the concert hall where the worst of Friday’s Paris attacks took place, French President Francois Hollande had strong words for the Islamic State.

“We are going to lead a fight, it will be pitiless.”

Hollande went on, “Because when terrorists are capable of committing such atrocities they must be certain that they are facing a determined France, a united France, a France that is together and does not let itself be moved, even if today we express infinite sorrow.”

Hollande’s vow to attack the Islamic State group without mercy came as the jihadist group admitted responsibility Saturday for orchestrating the deadliest attacks inflicted on France since World War II.

At least 129 people died Friday night in shootings at Paris cafes, suicide bombings near France’s national stadium and a hostage-taking slaughter inside a concert hall.

Hollande, who declared three days of national mourning and raised the nation’s security to its highest level, called the carnage “an act of war that was prepared, organized, planned from abroad with internal help.”

World leaders united in sympathy and indignation. New York police increased security measures, and people worldwide reached out to friends and loved ones in France.

The violence raised questions about security for the millions of tourists who come to Paris and for world events routinely hosted in the normally luminous capital, where troops were deployed to support police trying to restore order.

Hollande said France — which is already bombing IS targets in Syria and Iraq as part of the U.S.-led coalition, and has troops fighting militants in Africa — “will be merciless toward the barbarians of Islamic State group.”

Reflecting fears in other European capitals of the risk of coordinated or copycat attacks, the British government scheduled a meeting of its own emergency COBRA intelligence committee overseen by Prime Minister David Cameron. Italy said it, too, was raising security levels on borders and major public places.

President Barack Obama, speaking to reporters in Washington, decried an “attack on all humanity.”

A U.S. official briefed by the Justice Department says intelligence officials were not aware of any threats before Friday’s attacks.