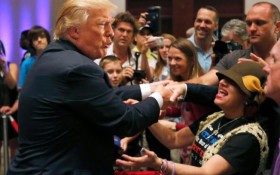 A stunning Fox News polls claims that Americans would be embarrassed to have billionaire Donald Trump as president — and that they’d be much prouder to have former Secretary of State Hillary Clinton and even current President Barack Obama as the Commander-in-Chief.

But many are wondering if the poll is nothing but the latest shameful tactic by Fox in its long-running war with Trump.

According to the data released today, Fox News is claiming eight out of every 10 Americans would not be proud to have Trump as president. Those numbers quickly improved, however, when respondents were asked how they feel about Clinton and Obama.

Twenty-eight percent of respondents said they’d be proud to have Clinton as president and nearly 40 percent said they’re currently proud to have Obama in the Oval Office.

The network also identifies Trump GOP rivals Carly Fiorina and Ben Carson as polling much higher than Trump in terms of presidential pride.

The Horn detailed yesterday the personal feud between media mogul Rupert Murdoch and Trump that has quickly devolved from disagreement to political war. So the timing of the poll has aroused suspicions — and left questions about who the respondents really were.

The Trump campaign has yet to respond to these allegations, possibly due to their boycott of the network.

According to the Associated Press, Trump is increasingly courting a wing of the Republican Party that might seem antithetical to his brand: evangelical Christians.

After initially declining the invitation, Trump will be speaking Friday in front of an expected 2,000 social conservative leaders at the Family Research Council’s Values Voter Summit in Washington. He joins a speaking program that includes Republican rivals with long records of dedication to religious causes — among them, former Arkansas Gov. Mike Huckabee, a Baptist pastor, and Texas Sen. Ted Cruz.

“I love them. They love me,” Trump, a Presbyterian, said of evangelicals last month in Greenville, South Carolina. “I love the Evangelicals, and it’s really shown in the polls.”