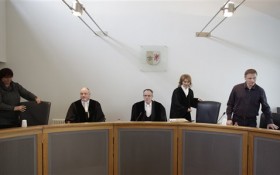 The trial of a former SS medic on 3,681 counts of accessory to murder for allegedly helping the Nazis’ Auschwitz death camp function appeared close to collapse Monday, after a doctor found the 95-year-old unfit to be transported to the court.

Presiding Judge Klaus Kabisch told the Neubrandenburg state court Monday that proceedings couldn’t begin after a doctor on the weekend found Hubert Zafke was suffering from stress and high blood pressure, and had suicidal thoughts.

Kabisch said Zafke had told the doctor “I can’t take it anymore, I’m at my end,” and that “I want to be with mother.” The judge said the latter was a reference to Zafke’s wife, who died in 2011.

The trial’s opening was postponed until the next session on March 14.

(The Archive of the State Museum Auschwitz-Birkenau via AP)

Prosecutors allege that Zafke’s unit was involved in putting gas into gas chambers to kill Jews and others, screening blood and other samples from hospitalized women prisoners, and otherwise helping the camp run by treating SS guard personnel.

They say the unit was also involved in auxiliary guard duties.

Zafke’s attorney insists his client was just a medic who did nothing criminal at Auschwitz.

The trial is one of several in recent years to arise from a shift in German legal thinking. Prosecutors have successfully argued that since Nazi death camps’ entire purpose was to murder Jews and others, helping the camp run in any manner makes one an accessory to those murders.

The charges against Zafke stem from a one-month period in 1944 and involve the deaths of Jews who arrived in 14 transports, including one that brought Anne Frank and her family to the camp. Frank died later at Bergen-Belsen.

Zafke was initially found unfit for trial by the court in Neubrandenburg, north of Berlin, but an appeals court overruled that after more medical exams, saying the retired farmer could stand trial so long as sessions were limited to two hours at a time.

Ahead of the trial, prosecutors and attorneys representing Jewish Auschwitz survivors who have joined the trial as co-plaintiffs, as allowed under German law, accused the Neubrandenburg judges of bias, but a motion to have them replaced was rejected.

Cornelius Nestler, who represents two brothers from Colorado who survived Auschwitz as young boys but lost both their parents, said his feelings were reinforced by the court’s decision to postpone the trial based on the assessment of a doctor called by Zafke’s children on Saturday, while there were two doctors in the court prepared to assess him.

“This court over the last months have shown that it is not interested in this going to trial at all,” he said.

Both defense and prosecution agreed that before the next session, Zafke will be assessed the same morning by court-appointed experts.