Electrical fires grind DC to a halt - The Horn News 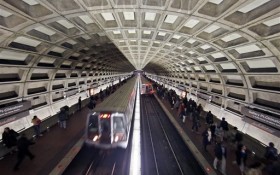 An unprecedented daylong shutdown of the Washington area’s Metro subway system will force commuters to spend a day without their most reliable form of transportation — and the source of their constant complaints.

Ridership on Metro has dipped as the system’s reliability has deteriorated, and gripes on social media occur daily.

Still, more than 700,000 people hop on the trains every day because it’s still the best way to get downtown from Maryland, Virginia and the city’s outer neighborhoods. On Wednesday, they won’t have that option.

The nation’s second-busiest transit system was shut down at midnight Tuesday for a system-wide safety inspection of its third-rail power cables, prompted by a series of electrical fires. It will reopen at 5 a.m. Thursday unless inspectors find an immediate threat to passenger safety, which the system’s general manager said was unlikely.

Federal employees were given the option to take the day off or work from home. A federal shutdown usually makes driving into the city much easier — but that’s with the Metro running. Officials were bracing for a difficult morning on the city’s already traffic-choked streets, and many commuters said they would have no choice but to stay home.

“It’s really frustrating. It’s how everybody gets to work,” said Atlee Ahern, 23, a Justice Department intern who takes Metro from her home in Bethesda, Maryland. “The whole system shuts down, the whole city shuts down.”

“While the risk to the public is very low, I cannot rule out a potential life and safety issue here, and this is why we must take this action immediately,” he said.

Metro’s six rail lines and 91 stations serve more than 700,000 riders daily, and it is a vital link for federal workers and other commuters to Washington.

A fire on the tracks led to major delays throughout the system Monday. The fire was caused by the same kind of electrical component that malfunctioned last year and caused a train to fill with smoke inside a downtown Washington tunnel, killing one passenger and sickening dozens.

D.C. Council member Jack Evans, the chairman of Metro’s board, said that while the system had previously been closed for days for weather, including earlier this year, Wednesday was believed to be the first time the system would be shut down for mechanical reasons.

U.S. Transportation Secretary Anthony Foxx said in a statement that putting safety first is the right choice but Metro needs to get serious about fixing issues.

“I’ve said it before, and I’ll keep saying it until the region takes real ownership of its safety oversight responsibilities: D.C., Maryland and Virginia need to stand up a permanent Metro safety office with real teeth. What are folks waiting for?” Foxx said.

Rep. Gerry Connolly, a Virginia Democrat, called the decision to shut down “a gut punch to the hundreds of thousands of commuters who depend on the system.”

News of the closure exploded on social media, with some on Twitter dubbing the situation “#Metromageddon” or “#Metropocalypse.” Riders who didn’t hear the news were informed via loudspeaker announcements on the way home Tuesday.

District of Columbia Mayor Muriel Bowser said additional police officers would be deployed to help deal with anticipated traffic gridlock. Construction work by city road crews will be suspended, and the city will increase service on its Circulator buses as well as offering free 24-hour memberships in the region’s bike-sharing program. Suburban bus lines were beefing up service as well.

Another population affected by the closure: students at the District’s public schools. The city does not have traditional school buses and many students rely on Metro, which they are allowed to ride for free, to get to school. The school system announced that while schools would be open, absences and tardiness would be excused. D.C. Council member David Grosso said he was concerned about student safety.

“This is a significant disruption for many of our families,” Grosso said.

Some commuters said they welcomed the decision out of concern for their own safety.

“If they’re going to prevent some catastrophe from happening, then it’s fine with me,” said Alex Smith, a 44-year-old trade association administrator who lives in Washington. “It almost seems like something they needed to do a long time ago.”