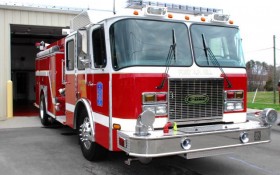 A special team of state troopers is investigating the death of a South Carolina firefighter who was struck by a fire engine on the scene of a blaze.

Christopher Gene Ray fell off the back of the Conway Fire Department truck Sunday afternoon, and the fire engine backed over him, Highway Patrol Cpl. Sonny Collins said.

The Highway Patrol team is reconstructing the incident, and troopers don’t plan to release any more information until they are done, Collins said.

“They are trying to put all the pieces back together,” Collins said.

Ray had been a firefighter for Conway for six years and spent seven years as a volunteer firefighter before that, Conway Fire Chief Le Hendrick said at a Monday press conference. He said Ray’s family has asked for privacy and did not release any more information about the firefighter or the incident.

Hendrick and Conway Mayor Barbara Blain-Bellamy thanked other fire departments in the area for helping out as Conway firefighters grieved for their colleague. The help will continue through Ray’s funeral on Thursday.

“Because we are a family, we will get through this together,” Blain-Bellamy said.

No other injuries were reported at the scene.