Exposed: The Senators selling out America on Iran - The Horn News 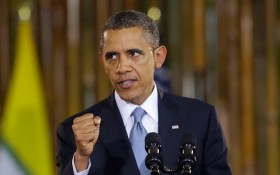 According to this recent poll by Quinnipiac University, the American public opposes the Obama administration’s nuclear deal with Iran by a ratio of over 2-1.

But that hasn’t stopped 34 Senators from announcing they will help uphold President Obama’s expected veto of a Republican bill aimed at killing the deal.

According to reports by the Associated Press, yesterday Obama got the 34 pledges he needed in the Senate to protect a veto after Sen. Barbara Mikulski of Maryland hopped on board.

GOP lawmakers say Iran got too many concessions in the agreement, which aims to curb the country’s nuclear program in exchange for hundreds of billions of dollars in relief from international sanctions.

Israel also has railed against the deal, arguing that its conditions would keep Iran perilously close to developing nuclear weapons while enriching a government that has funded anti-U.S. and anti-Israel militants throughout the Middle East.

Is your senator ignoring the American people and helping push the deal through? Here’s the list of the guilty 34.